Home »»Bern and its University 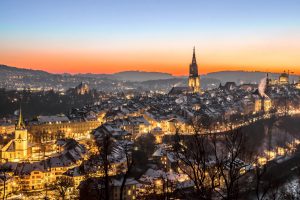 “It is the most beautiful that we have ever seen,”

wrote Johann Wolfgang von Goethe in a letter to his friend Charlotte von Stein during his stay in Bern in 1779. Today the Swiss capital or “federal city” still enchants its visitors with its charm. It is the fourth largest city of the country (ca. 140’000 inhabitants; 400’000 incl. urban agglomeration) and located in the German speaking part of Switzerland. The Old Town of Bern was declared to be part of UNESCO World Heritage as early as 1983.

The University of Bern was founded in 1834 (replacing a Theological Seminary of the 16th century). Today, it is the third biggest university in Switzerland with around 17’500 students. It offers a broad choice of courses and programs in eight faculties and some 150 specialized institutes.

The Institute for the Science of Religion was founded in 1991 and is part of the Department of Art and Cultural Sciences.

Scroll Up
We use cookies to ensure that we give you the best experience on our website. If you continue without changing your settings, we'll assume that you are happy to receive all cookies from this website. If you would like to change your preferences you may do so by clicking on "About Cookies".Ok, fine.About Cookies